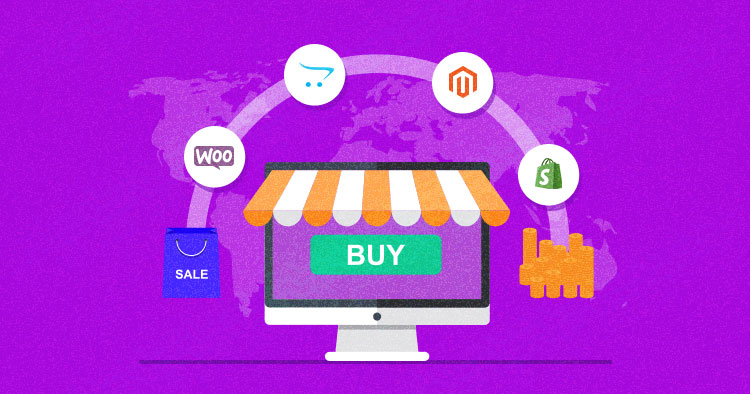 The ecommerce industry is expected to grow at a rate of 6% year on year until 2024. During the last year, ecommerce sales rose to $787.9 billion. This is more than a 30% increase over the year before.

The ecommerce market itself grew by 44% in the previous year alone, based on data from the Department of Commerce. Take a look at this table to see how ecommerce sales are expected to grow in the upcoming years. 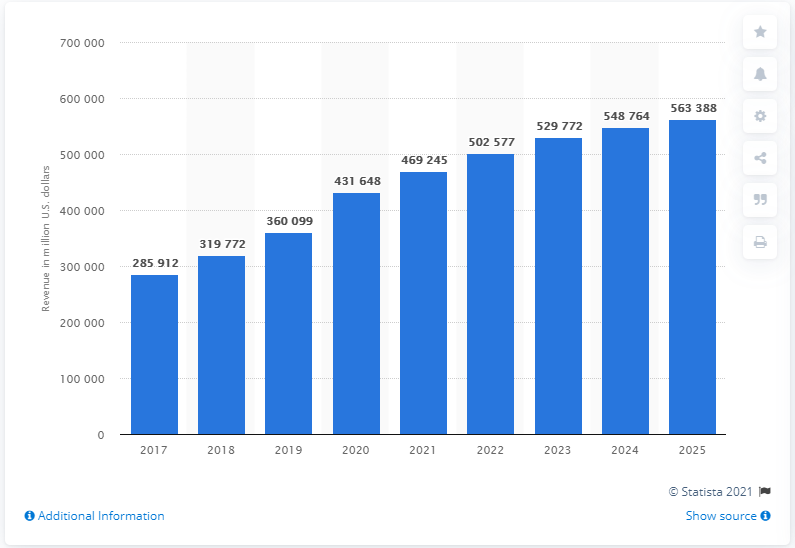 Now, there are several ecommerce platforms, and if you are interested in launching your own store, it’s important to choose the right one. Let’s analyze some of the most popular platforms and see how they have evolved over the years. 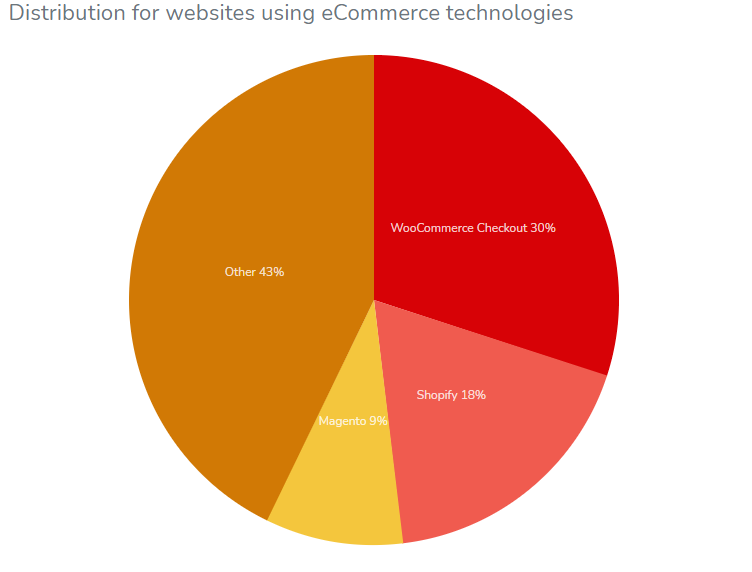 As you can see, WooCommerce Checkout and Shopify own a majority of the share when it comes to ecommerce platforms. Magento dominates the market, and its share has continued to increase in the past few years. Currently, it owns almost 10% of the global ecommerce market.

The entire ecommerce industry has grown dramatically over the years, and as a result, adoption rates for different platforms have also increased.

On the other hand, Shopify’s growth rate has remained stagnant at 18%. But, when you consider the fact that the entire ecommerce market as a whole has grown considerably, it’s easy to see that simply maintaining the same figures has also led to an increase of users.

The surprising change is with Magento, which has fallen from 13% in 2018 to 9% in 2020, primarily due to the increased complexity and availability of simpler platforms.

The rest of the industry is dominated by platforms like BigCommerce, SquareSpace, OpenCart, Ecwid, and others.

Load Your Ecommerce Store Under 1 Second

Google loves websites that load in a SINGLE second. Our optimized ecommerce hosting stack lets you do that.

There are many ecommerce platforms to choose from. I can get a bit overwhelming for an entrepreneur. In this article, we shall be covering…

WooCommerce consistently ranks among the top rated ecommerce platforms, with an ever increasing adoption rate. The company regularly  introduces and updates new features as well.

One reason for WooCommerce’s popularity is the fact that it is a simple, free-to-use plugin for WordPress – the most popular CMS in the digital world today. Plus, the WooCommerce platform allows you to scale your ecommerce store effectively with little to no trouble at all.

It’s the ultimate solution for people who want to launch their stores quickly and efficiently using WooCommerce.

Magento’s ecommerce platform had the 2nd largest market share in 2017 with nine percent of the global ecommerce market share. However, in  2018, the tables turned when it lost its dominance to Shopify. That gap continues to grow as Shopify has twice the adoption rate as Magento in 2021.

Many Magento users switched to Shopify for an easier functionality. However, Magento offers customization that Shopify is unable to provide, which is why it’s been able to hold on to its technically proficient customer base.

This open-source platform comes with a number of tools for analytics, monitoring and conversion optimization. Magento supports both OOP and MVC architecture, which is a great deal for web developers but not so much for the not-so-tech-savvy. It might be a challenge for users who do not have the sharp technical skills required to modify Magento and  scale their ecommerce stores effectively. But if you do have the technical expertise, Magento can prove to be an amazing online store platform for your business.

Shopify is the second-largest  ecommerce website platform in 2021. It promoted itself to the second spot in 2018, and has continued to maintain its dominance.

The majority of ecommerce entrepreneurs are opting for Shopify simply because of its user-friendly interface. The integration of Amazon services has also allowed Shopify to greatly improve its market share. With an array of Shopify resources available online, it is one of the best ecommerce marketing platforms for your products and services.

It is, however, a self-hosted platform. As a result, many people who want greater freedom look for Shopify alternatives.

Although BigCommerce is a comparatively new player in the ecommerce industry, it still has been growing at a whopping pace of 600% per year.

While major players like Magento and Shopify have yet to cede ground, BigCommerce is doing everything it can to catch up. Their aggressive acquisition strategy has allowed them to strategically challenge the global competition, and outgrow themselves as an emerging ecommerce platform. 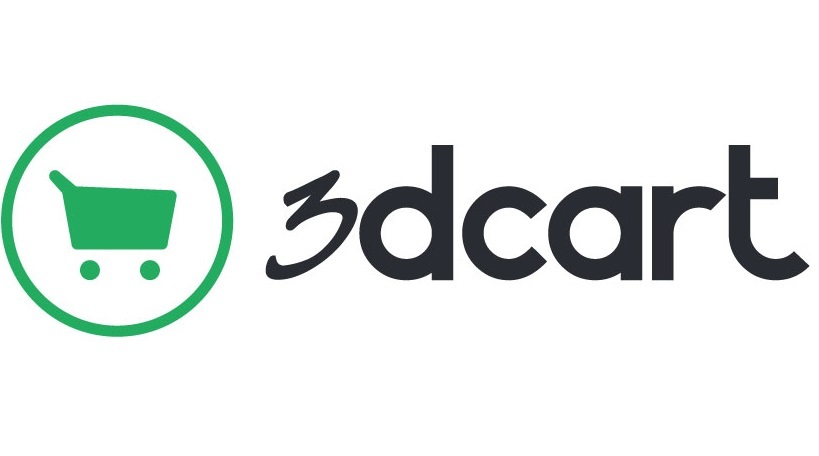 3dCart has been winning customers from the BigCommerce market share, but is also losing customers to Shopify at the same time. While it’s a great ecommerce platform overall, it still needs to evolve immensely. It might not be a great choice for you if you have heavy traffic coming in on your online store. Nonetheless, in the near future, we expect it to make a place for itself in the global competition.

SquareSpace has also become incredibly popular in the past couple of years, though they are nowhere near Magento or WooCommerce levels.

Squarespace gives you everything that you need to start a store, including a range of themes, customizable features, and a lot more. However, there are a few constraints that keep it from being accessible to large store owners.

For example, Squarespace has limited customization features. Plus, since it’s a hosted platform, you may have a hard time choosing a better host.. 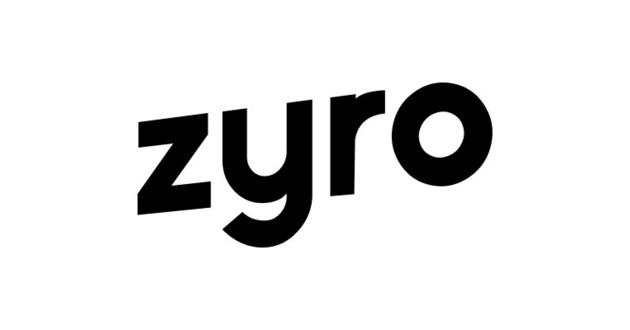 Zyro is another drag-and-drop builder with a host of AI tools and even a logo-maker.

It has everything that you want to get your store off the ground, including a hosting platform. There’s a free version as well. However, you can’t switch templates, and the free accounts are quite limited in terms of functionality.

Oh, and you can’t schedule blog posts. But if you need a simple barebones ecommerce website builder, this is the way to go. 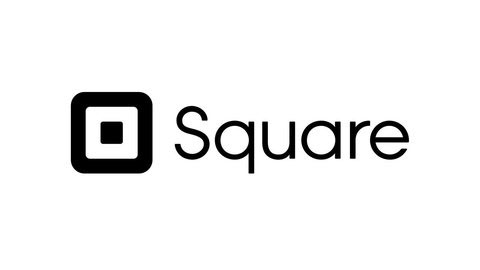 Known as Weebly before its acquisition by Square, Square Online offers excellent value for money, as well as good design flexibility.

Weebly still exists, and it’s ideal for smaller businesses. However, if you are running a larger ecommerce store, Square Online might be what you need.

It’s got all the necessary features, including in-built marketing tools, and a dashboard that presents all the information you need at a glance. 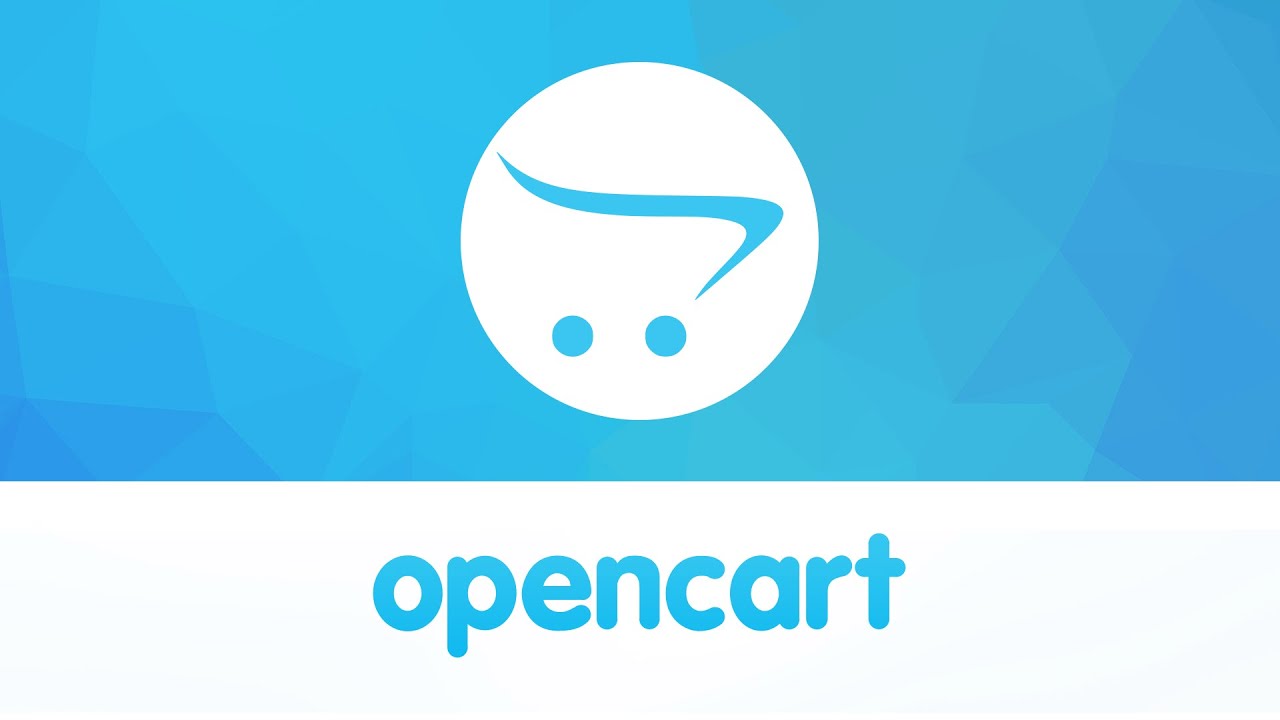 OpenCart has lots of customizable options, and there’s no monthly subscription fee. You also get multi-store support that allows you to manage multiple stores from a single platform.

It’s also got a range of flexible attributes and options; with more than 1,300 modules and themes available, it’s a great choice if you want to create custom stores.

Unlike other ecommerce platforms like Shopify or Bigcommerce, it enables startups, SMBs & enterprises to launch their digital marketplaces without any external plugin or app. Also, Yo!Kart comes with a lifetime license and one-time pricing model making it a cost-efficient online marketplace software.

Volusion is a hosted platform, with prices starting from $29 and going all the way to $299, which is the same range as Shopify and BigCOmmerce.

It’s affordable, and it also gives you access to more than 30 payment gateways. Plus, the platform doesn’t charge any transaction fee. And it’s got a fairly intuitive website builder as well.

“Like Shopify, but free” – that’s how Ecwid markets itself. Ecwid is a SaaS tool that requires a subscription. The company continues to add new options for store creation.

But it’s  different from BigCommerce and Shopify in the sense that it would be harder to create a standalone store with it.

Instead, you can use Ecwid to add an additional store to your current online presence.

Salesforce is already a big name. You can create a range of different kinds of cloud-based ecommerce stores using Salesforce Commerce Cloud, which gives you customizable features for sales, marketing, order fulfillment, feedback, and a lot more.

Top Ecommerce Platforms by Region – Updated as of 2019

It’s time to highlight the ecommerce platform market share by different regions alongside the global market share. The numbers are promising. Here is the breakdown of the major regions:

i. The United States 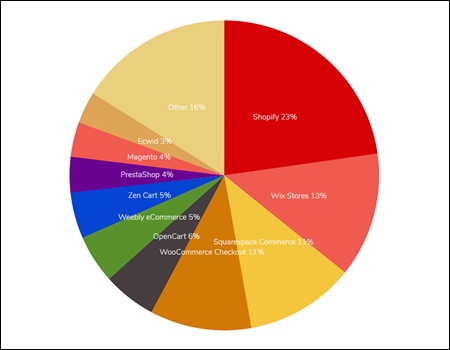 In contrast, Magento, OpenCart, Prestashop, and Zencart are custom ecommerce platforms that allow store owners to fully customize their store as per their will. 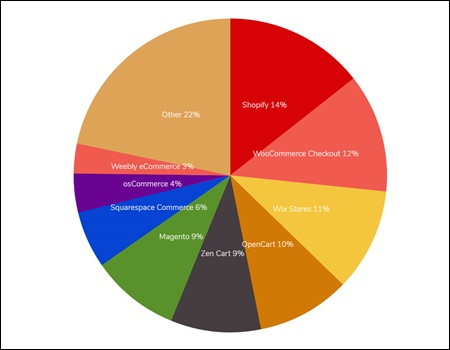 The 2018 global ecommerce platform market share by BuiltWith clearly shows us how ecommerce entrepreneurs are drifting towards an easy-to-use interface instead of taking complete control over design and functionality of their store. 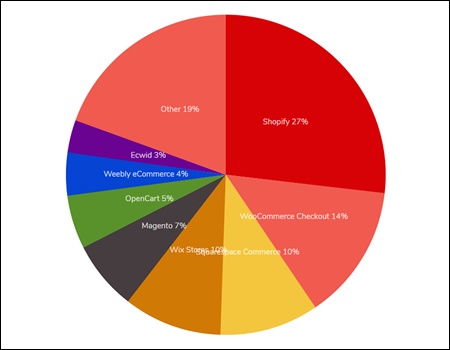 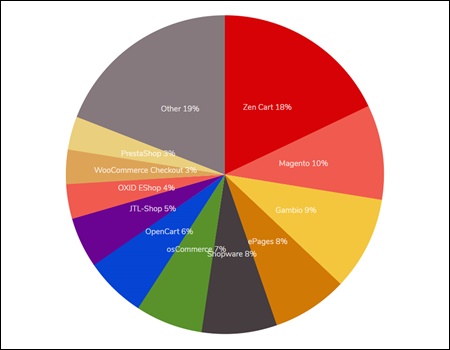 That’s a colorful pie, isn’t it? That’s because the Germans prefer to use a variety of ecommerce platforms. Interestingly, unlike the USA, the UK or Australia, Germany’s leading market share belongs to Zen Cart (18%) and not Shopify.

It looks like the Germans tend to opt for higher functionality instead of user friendly interface. As a matter of fact, I also strongly believe that an easy-to-use interface is not the key to scale your ecommerce stores effectively. You need a custom ecommerce platform with appropriate analytical tools in order to outgrow the potential of your ecommerce business. 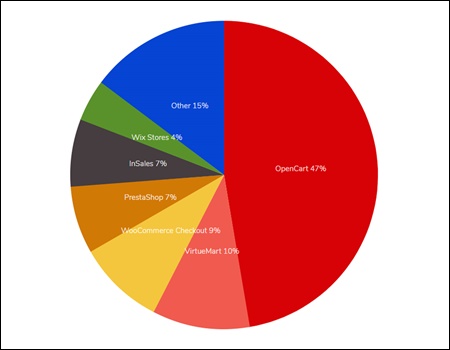 In the Russian market, OpenCart dominates with a massive 47% market share. VirtueMart lies in the second place with 10% market share. ecommerce platforms like WooCommerce (9%), PrestaShop (7%) and InSales (7%) have a notable market share as well. Although Wix Stores managed to get a hold of 4% of the market share, it is still a long way behind OpenCart.

Before we jump to conclusion of this article, there is one more thing you need to know, in order to understand the market share of the top performing ecommerce platforms. BuiltWith has provided a detailed analysis that represents the ecommerce platform market share based on the ENTIRE INTERNET and not just the top one million websites. 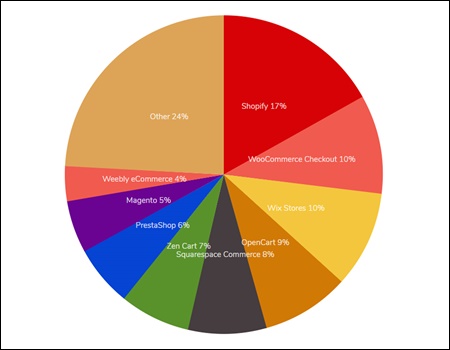 Ecommerce Platform Market Share Based on the Entire Internet – BuiltWith

According to the illustration above, Shopify market share leads with 17% from the entire World Wide Web.  WooCommerce and Wix Stores (with 10% market share each) are the 2nd most favorite ecommerce platforms of netizens from across the globe. These statistics represent how netizens tend to prefer ease and comfort over functionality and customization.

Which One Should You Choose?

It’s obviously difficult to make a selection with so many options available. You could go with WooCommerce if you have a WordPress website. If you want a hosted platform, Shopify might be your best bet. Or, if you want something that is fully customizable and open source, go with Magento.

Regardless of the platform you choose, it’s important to do your research carefully and read up on their features before you make a choice.